Maurizio Sarri isn’t a greedy man; all he wants for Christmas isn’t you, it’s Emerson Palmieri.

He might have to wait until January to open his present, because that’s when the transfer window opens, but the crux of the matter is, he wants a left-back to help Alex Sandro, and the man on his wishlist is the Italy international.

That’s what La Repubblica are reporting on Friday, claiming the Chelsea defender is the ‘only request’ made by his former manager at Stamford Bridge, but it will be tricky to get him.

Juventus will try, though, as it’s stated an attempt ‘will be made’ in January to convince Frank Lampard to let the 25-year-old return to Italy, but the likelihood of that happening is slim. 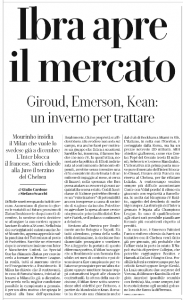 That’s why the Italian newspaper believe there’s a better chance of a deal taking place in the summer at a time when Chelsea won’t be under a transfer ban and will be able to replace Emerson if they so wish.

We’ll find more about all this in the first couple of weeks of December, when the Court of Arbitration for Sport are expected to announce their findings following an appeal from the London side.

If they lift the ban, then that gives Juventus a little bit more hope of getting their man in January.