Leicester City star Ricardo Pereira has been interviewed by his home country’s media this week, speaking to Portuguese newspaper Record.

The 26-year-old has talked a lot about the good start to the season the Foxes are having, but there was a lot about Tottenham Hotspur in the conversation as well.

José Mourinho’s arrival in London is getting big coverage from the Portuguese press, and a chat with a player who features in the Premier League would obviously have a few mentions about the Special One.

Pereira was first asked about the manager’s new job, with the Leicester City player said Mourinho has been missed in English football.

“Yes, of course he’s been missed! He’s one of the best coaches in the world. It’s always good for us Portuguese people to get back to work here in England. He’s one of the big names in Portuguese football. He’ll be able to show his value again, he’ll be back in the spotlight. It’s more of a challenge for him,” Ricardo Pereira told Record. 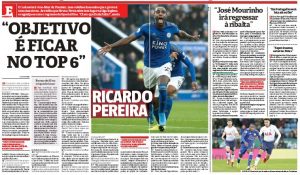 “The league is very balanced. The point difference between 14th and 5th place is quite short. In addition, much competition is still to come. Therefore, he has more than enough time and conditions to succeed.”

Then it was mentioned the English press has been linking Ricardo Pereira with a move to Spurs, but the player says he hasn’t heard it yet.

“This is news you’re giving me [laughs]. I don’t follow the English press, I care more about the Portuguese. I don’t know anything! For now, I stay the same. I feel good here, I only think of Leicester. Fortunately, the team has been doing very well.”

Finally, Record spoke about Tottenham interest in Bruno Fernandes, and asked Pereira if he thinks the Sporting midfielder could do well in the Premier League.

“Of course! He’s already shown this year, and especially last year, that he’s a great player. He also always shows quality in the national team. He’s very complete, has quality for higher levels.”