Cesc Fabregas’ emotional exit from the pitch against Nottingham Forest on Saturday made it pretty clear his departure from the club is very close indeed.

The Spaniard struggled to hold back the tears as teammates embraced him, before clapping the fans at Stamford Bridge. Fabregas returned to the pitch after the match to once again thank those supporters who wanted to wish him well.

AS Monaco have been trying to persuade the former Barcelona player to sign for them and whilst at one point their confidence dropped, things changed.

In their Sunday edition, L’Equipe report Fabregas and his representative have a meeting with AS Monaco later on Sunday and the move could even be finalised today.

The French newspaper say that as of Saturday evening. Monaco and Chelsea hadn’t managed to finalise their own agreement. 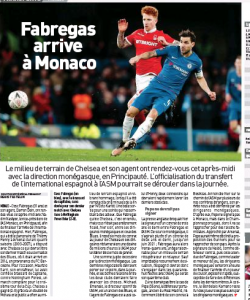 Fabregas’ contract expires in the summer, and they want €10m for their player to leave in the January window. The Ligue 1 club consider that too high a figure, but there’s a good relationship between those negotiating and it’s thought agreement can be found today.