Timothy Weah moving to Celtic has been covered repeatedly in the French media for the past couple of weeks or so.

The young forward can’t push his way into PSG’s team or even get minutes on a regular basis, so a loan move is the best option for everyone involved.

As L’Equipe reiterate in their Sunday edition, the 18 year old will be loaned by PSG to Celtic for the rest of the current season. He’s expected to share Brendan Rodgers’ attack with Odsonne Édouard, who he’ll know from PSG’s training centre.

Before letting their player leave for the Scottish Premiership club, PSG wanted to get an extension on Weah’s current contract, which was set to end in 2020.

A meeting on Saturday with the player’s representatives achieved that, and that means the move to Celtic can now be completed. 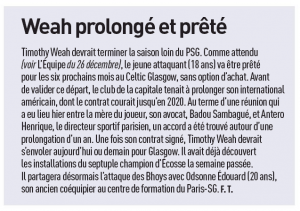 That will see everything signed and completed and the player can become part of Rodgers’ squad.

There’ll be no buying option on the loan.