Spanish newspaper AS report that Zinedine Zidane has had a chat with Alvaro Morata, explaining to the striker that he has an important future at Real Madrid. However, Morata is said to be concerned about his future and doesn’t want a repeat of his support role next season, so a move is on the cards.

Morata is said be determined to have a more prominent role, especially ahead of the World Cup. He’s had offers too, explain AS, with Chelsea and Manchester United said to have made the ‘strongest knock at the door’ to sign Morata.

Chelsea interest has been reported for some time, and it’s been backed up by Morata himself. Confirming approaches and offers from Chelsea on more than one occasion, 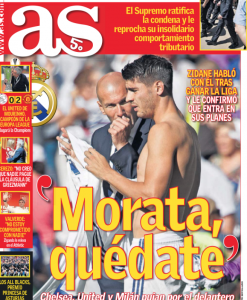 Morata has certainly flirted with the idea of signing for Antonio Conte.

Manchester United links have been encouraged since the injury to Zlatan Ibrahimovic, and AS believe Morata would be assured of a more important role at either of the English clubs.

Morata ‘burst into tears’ in front of Madrid’s Cibeles during the club’s La Liga celebrations, which AS believe is a hint he could be leaving.