Chelsea are ‘in the lead’ for Juventus defender Matthijs De Ligt, should Mino Raiola be able to reduce his release clause at the club.

That’s according to Tuttosport, who say the super-agent is working to find an agreement with Juventus that will make the defender easier to sign for clubs around Europe.

They explain that Juventus and De Ligt are working on a renewal of his current contract, with Raiola in talks with the club over the last few days.

The talks are a very early stage at this point, but there is a common will to extend the player’s stay and ‘postpone the goodbye’ for now.

Because of this, Juventus and Raiola are working on a ‘compromise’ of sorts that will see him extend his deal by another year but lower the €120m release clause in that contract from July next year.

De Ligt is currently the highest-paid player in the Juve squad, and they are not in a position to offer him more money at this moment in time. They, though, can’t run the risk of losing the defender, who will be in the final two years of his deal come the summer.

A player in the final two years of his deal is seen as a risk, so Juventus want to avoid that issue by working something out with Raiola.

Fortunately, they have a very good relationship with the agent, and the idea of a shorter renewal plus the lowering of his release clause has been mooted.

Such an agreement is seen as advantageous to all involved as Juventus would get to keep De Ligt for slightly longer and have extra time to find a replacement. The player and his agent, meanwhile, would have a better chance at a move in the near future.

Indeed, a lower clause is seen as ‘more humane’ and ‘attackable’ for foreign clubs, who are keeping an eye on De Ligt and of whom Chelsea are ‘in the lead’.

The Blues are believed to be looking for a centre back as it is and chased Jules Kounde in the summer but couldn’t get a deal done.

The situation looks likely to get worse in the future as the likes of Andreas Christensen, Antonio Rudiger, and Cesar Azpilicueta are out of contract in the summer and have yet to extend their deals. 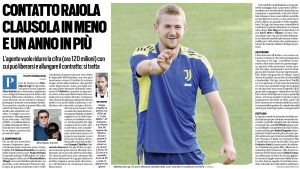 That could leave Chelsea needing a replacement, and De Ligt would be ideal, particularly if he can be got for much less than the €120m currently in his contract.

At the minute, though, they are very much just keeping an eye on things, with Juventus and Raiola working side by side on a renewal and relations between both more than amicable.

So, if you happen to see any rumours about Chelsea and De Ligt in the coming weeks, they likely come from this story, which in reality has the briefest mention at best and is really more about Juventus working on a new deal than anything like a transfer move by the Blues at this point.