Despite buying Cristian Romero from Atalanta in the summer, Tottenham, and more importantly Fabio Paratici, are still on the lookout for a centre-back.

The arrival of Antonio Conte might have something to do with that as well, and one of the targets being pushed by Tuttosport of late is Torino’s Gleison Bremer.

The defender has recently been linked with moves to both Liverpool and Manchester United, showing just how well he has been playing for the Serie A club of late, and now Spurs have been thrown into the mix.

According to Monday’s edition of the newspaper, Paratici ‘has not denied’ his interest in the player for next season to his ‘Italian confidantes’, hinting that a move could take place during the second half of the campaign.

Why not before? Torino aren’t in an absolute rush to sell because the Brazilian’s contract doesn’t expire until 2023, and while he doesn’t seem keen on renewing, they want to ensure they can enjoy him for as long as possible before parting ways. 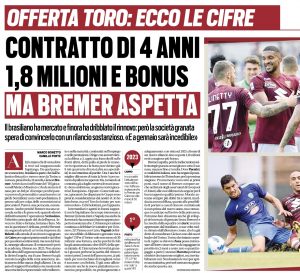 There’s still hope he’ll sign a new deal, even if it is to allow them to sell him for a bigger fee, but as things stand, Urbano Cairo, the club president, values him at ‘no less than €30m’.

A tough ask for January, which is why Paratici seems to prefer the next summer option.

Tottenham attack ‘put aside’, partly due to ‘much more favourable payment terms’ from Liverpool

Club ‘entitled’ to around €8m of potential Newcastle transfer – Will...

Tottenham attack ‘put aside’, partly due to ‘much more favourable payment...