Just days after the reports of Fenerbahçe interest for Chelsea forward Tammy Abraham, their fierce rivals Galatasaray are now linked with the English striker. The youngster is currently on loan with Bristol City, and has also been linked with Aston Villa.

Galatasaray are reportedly looking for a striker to replace the departing Lukas Podolski and Chelsea’s Abraham has emerged as a target. It’s been claimed Galatasaray have offered Chelsea a loan deal without an option to buy.

The 19-year-old has also drawing attention from Aston Villa in recent weeks, and they would need to act quickly given the interest in the player.

Aston Villa boss Steve Bruce will know Abraham is a proven goal scorer at Championship level following his spell with Bristol City in this campaign, and it’s no surprise if he’s keen on a loan 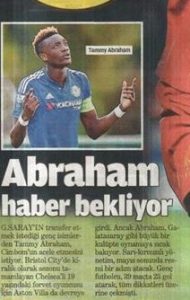 Abraham has scored 25 goals this season for Bristol City, which makes him the second top goalscorer in the Championship behind Leeds United’s Chris Wood.

Chelsea are reportedly happy to send the forward for another loan spell as manager Antonio Conte believes first team experience is crucial for the development of the England youth player.