The 25 year old has represented Angola at international level, but was born and brought up in Belgium so a return to the country made sense. Vetokele’s second Charlton loan of the season has worked out better than the first already, but he’s still unsure of what the next season holds.

Speaking to Belgian newspaper Het Belang van Limburg, the Charlton owned player explained: “There is no reason to stress. I have another contract for two years at 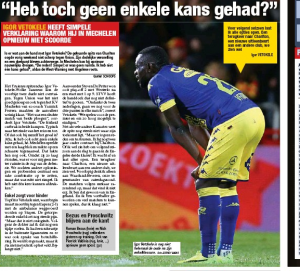 Charlton. Whether I would like to get started in the English third tier next season? I’m waiting and leaving it open. A return to Charlton, a new loan to another club, we’ll see.”

Vetokele doesn’t sound particularly thrilled about the prospect of playing for Charlton in League One next season, and the club will likely have to find him another loan destination.