Home Premier League Chelsea Chelsea among ‘army’ of clubs keen on signing – Blues can get...
SHARE

For quite some time it’s seemed the Dutch media have hyped interest in Andre Onana beyond what it actually is.

Some of the biggest clubs in European football have been credited with an interest, yet it’s often felt like the claims were manufactured to push up the Ajax player’s perceived value.

Monday’s edition of De Telegraaf states there’s an ‘army’ of clubs all chasing Onana’s signature this summer. Those clubs are named as Chelsea, Barcelona, Borussia Dortmund and PSG.

According to the Dutch newspaper, prior to Covid-19 Ajax wanted €50m to allow Onana to move this summer. Now a fee of €30m is considered more realistic.

That doesn’t make a great deal of sense, if Onana is really wanted by the clubs mentioned, then slashing his asking price by 40% would be unnecessary.

Such a scenario further suggests this is all being talked up beyond what is actually real. De Telegraaf say Barcelona can’t pay the €30m, and that Chelsea ‘do not want to’ meet that figure yet, and would only sign Onana if Kepa Arrizabalaga leaves on loan or permanently. 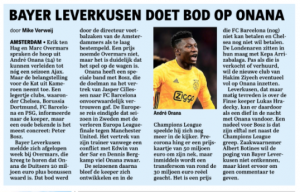