Catalan newspaper Sport have a mildly entertaining snipe at Jose Mourinho in their Friday edition. Sport aren’t big fans of the Manchester United manager, he’s their pantomime villain from his time in charge at Real Madrid.

Mourinho is the perfect bad guy for the Catalan media and they enjoy getting the odd dig in. This time Romelu Lukaku and Chelsea’s interest in signing the player is the medium used.

Sport go over some of the players Mourinho allowed to leave the club, like Lukaku, Kevin De Bruyne and David Luiz. It’s explained Michael Emenalo was against the decisions but Chelsea ‘allowed’ the transfers to happen because they were keen to show public support for their manager. 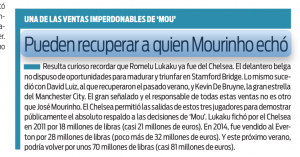 There have been times Emenalo hasn’t been popular among Chelsea fans, almost exclusively for things that haven’t been his fault, and the club didn’t want to be accused of undermining Mourinho.

Now, with the Portuguese manager in a new life at Manchester United, Chelsea are looking to reverse another perceived mistake, and sign Lukaku back.