Arsenal, along with Manchester City, are the clubs trying to edge ahead of others in the race for Issa Diop. Toulouse’s 20 year old central defender has a growing list of admirers, and Red Bull Leipzig have already had a €13m offer for the player turned down.

A month ago Arsenal and Tottenham both sent officials to watch Diop in action against PSG. The youngster put in an impressive display, with both London clubs going home impressed.

Tottenham upped their scouting of French football under Mauricio Pochettino. The Argentine took Southampton’s France scout with him to Tottenham, and Spurs have recruited more than once from the country since.

Georges-Kevin N’Koudou and Clinton N’Jie have both arrived since, and whilst it hasn’t been the most successful of shopping routes for Tottenham, Pochettino’s spies continue to look. 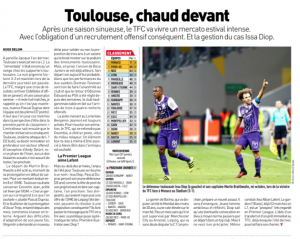 Arsene Wenger being keen on a young French player is no surprise, and Diop would tick several of Arsenal’s usual transfer boxes. He’s not going to require huge wages, is a player who can be moulded, and the transfer fee wouldn’t be prohibitively expensive.

French newspaper L’Equipe say Arsenal are preparing an assault ahead of the summer transfer window, there’s no mention of Tottenham this time. Toulouse aren’t keen to sell but an offer around €20m would surely start to change that.