The William Carvalho saga has hit a stage where we know the feelings from almost all the parties.

West Ham, Sporting, Bruno de Carvalho and Nuno Saraiva have all given their sides in the past few days, but there’s one person who’s been pretty quiet, and that’s the player himself.

William still hasn’t commented on the collapsed West Ham transfer, and apparently, not even the Portuguese newspapers know exactly what has been happening around him.

There are two versions of the story out in the local media today, each one claimingWilliam Carvalho took the failure in a different way. 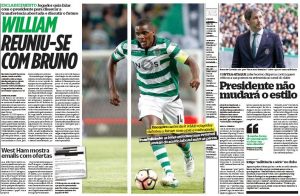 Let’s start with O Jogo, who claim that after talking to the club president on the phone, William Carvalho was at Sporting’s headquarters on Wednesday, accompanied by his father and his agent, Pere Guardiola.

They say that William wanted to know all the details why the transfer did not go through, and after being told by Bruno that West Ham didn’t want to pay the demanded amount, he was also convinced that he must have a great season in order to get a move next summer. 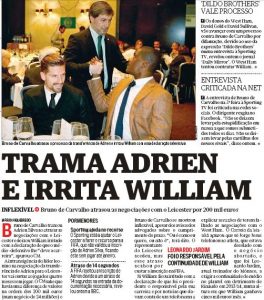 But Correio da Manhã has a totally different version, saying that Bruno hasn’t even called William since his West ham move collapsed, and only manager Jorge Jesus has been in touch.

The newspaper claims William is actually pretty upset because of Bruno’s quotes saying the midfielder ‘owed him his career’.

Correio da Manhã also found out that it was Leonardo Jardim who brought the player back to Sporting from a loan, and not Bruno de Carvalho, contradicting the earlier claims.

With one newspaper’s info conflicting the other, we can never be sure on who to believe. We just grab our popcorn and wait for the next chapter, hoping West Ham and Sporting continue to provide a show.