That’s according to today’s Salzburger Nachrichten, who provide an insight into the talks between the clubs, and where the case is currently at.

Salzburg had released the midfielder from training due to the negotiations with Leeds, but the talks had come to a standstill. This was because of the fee demanded by the Austrian champions.

Jesse Marsch’s side lacked finances to carry out the deal for the midfielder, according to the report. However, that will change due to Kalvin Phillips’ impending sale to Manchester City and Raphinha’s transfer, potentially to Barcelona.

These two deals should help the Whites earn in excess of €100m. Therefore, the report states 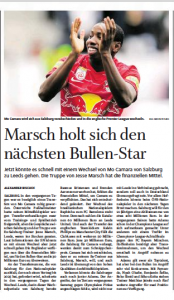 the €30m fee demanded by Salzburg should be a ‘bargain’ for Leeds.

With the Premier League side set to have the ‘financial means’, a ‘change could now happen quickly’.

Camara, for his part, has ‘decided to join’ Marsch at Elland Road. At the same time, Leeds are also convinced of his high quality.