At the weekend, Barcelona president Joan Laporta claimed Manchester United are not the only club interested in Frenkie de Jong and said he will do whatever he can to retain the midfielder.

Sport on Monday explain the Red Devils have offered a €65m fixed fee plus an additional €20m in bonuses for the Netherlands international.

The La Liga side still hope to receive more money in order to improve their finances. At the same time, they are willing to let the 25-year-old stay at the Camp Nou, provided he takes a pay cut.

De Jong has continued insisting he wants to continue at the Catalan club, say Sport, but that will only be possible if he reduces his salary. Starting from this season, the ex-Ajax man will see his wages increase [as per the contract], something that Xavi Hernández’s side cannot afford.

Manchester United continue to insist on the Dutchman, who wants to stay at Barca. The ball is in his court on whether to take a pay cut or get a move to Old Trafford.

Sport’s claims are echoed by Marca, who provide more information on De Jong’s salary and the negotiations between Barca and United.

It’s claimed the midfielder will earn €10m net per year, and to this, they must add the fee that needs to be amortised. In other words, he will cost Barca about €40m next season.

Therefore, he will have to drastically lower his salary to stay at the club. This is essential for the Dutch midfielder to continue at the Camp Nou, but Marca explain it won’t be easy for him to accept the Blaugrana’s proposal.

Meanwhile, Barca ‘continue to negotiate’ with United for De Jong and the position of the two clubs is ‘no longer far apart’.

Talks between the two clubs are to see whether the fixed fee of €65m can be raised. 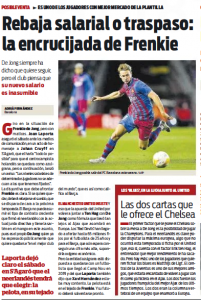 Erik ten Hag’s side intend to include difficult variables, while the Spanish club want it to be easy so they can earn more money in the future.

The positions are ‘not distant’ and the agreement between the two clubs could take place, if De Jong decides not to take a pay cut.

It is not clear what De Jong plans to do as Marca explain that at the moment, the future of Xavi’s man ‘remains unknown’.