Starting on the bench against Olympiakos on Thursday evening, Alexandre Lacazette had to make do with just two minutes of game play.

Brought on late on by Mikel Arteta, the striker once again saw himself reduced to a small cameo in an Arsenal game in a season that has seen him appear rather sporadically.

Once a regular starter, the France international’s future at the Emirates is now uncertain, with a contract ending in 2022 and clubs lurking.

Among those are AS Roma, who know Edin Džeko isn’t going to last forever, so a new striker will be needed in the summer. 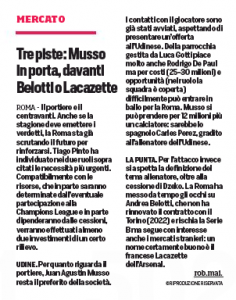 The first of the two could be a good deal should Torino get relegated to Serie B, while the Frenchman is described as a ‘certainly good name’ from abroad, as they are ‘following with interest’ the foreign markets.

It remains to be seen how much Arsenal will want for Lacazette in the summer if they are indeed open to selling him, but considering his reduced status these days (compared to the past, at least) and his contract running out, there will likely be a deal to be done here at a more than reasonable price.