Celtic defender Boli Bolingoli has insisted the SPFL had ‘no choice’ but to hand them the title when they decided to end the season.

Scottish football was brought to a premature end earlier this week after the SPFL declared there had been a ‘unanimous’ vote to do so.

That saw Celtic, who sat top of the table by ten points when the league was postponed, declared as champions and handed their ninth straight title.

Naturally, there have been some protestations to the decision, particularly from Rangers, given they could have still mathematically caught their fierce rivals.

Bolingoli has dismissed such talk, though, insisting he and his Celtic teammates were never going to give away their lead.

“They had no choice. We were first with a ten-point lead on Rangers,” he told Het Laatste Nieuws.

“We’re Celtic. We really wouldn’t give this away. We earned this. We played a good season. It’s just a shame we couldn’t celebrate yet.

“The players who are still in Glasgow have passed around the cup, but I’ve been back in Belgium for a few weeks, so I haven’t been able to enjoy it yet.

“Hopefully we can make up for that when the training starts again.”

Bolingoli has enjoyed a solid first season in Scotland, racking up 28 appearances in all competitions under Neil Lennon following a move from Rapid Vienna in the summer.

Life in Scottish football has proven to be very different from what he’s accustomed to, having spent the earlier years of his career in Belgium.

The change is something he is enjoying though, saying Celtic’s clashes with Rangers are the most special aspect of it all.

“The Old Firm against Rangers. Those derbies are hard.

“The whole country lives to see those games. Furthermore, football there is physically heavy.

“The level at Celtic is so high that there’s a big difference in quality with the other teams – even though they sometimes make it hard for you.”

The left-back has also had to learn to adapt to a change in his personal life, with Scottish football fans far more engaged than their Belgian or Austrian counterparts. 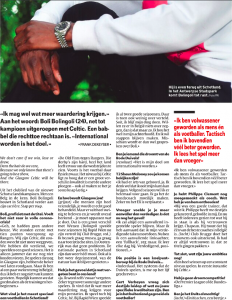 This is something he’s already experienced, admitting that Celtic fans notice him wherever he goes.

Despite that, he’s trying to enjoy life outside of football as well, even though he’s finding the change in climate a little difficult to adjust to.

“But there’s a lot to do, and you’re recognised everywhere – you have to be careful what you do. That’s a big difference with Vienna.

“I like to visit museums, go to tourist sites, in Austria that wasn’t a problem.

“The national parks in Scotland are very beautiful. Even though the weather is depressing, I can continue to enjoy nature.”