Celtic’s effort to complete the permanent signing of Jota is today highlighted in the Portuguese media.

It’s a pretty short story from newspaper Record which reports it, and to be honest, they still managed to make it sound a little confusing.

Their headline first says ‘Celtic agree Jota’s purchase’, pointing out the Hoops ‘trigger the option’ to buy the winger.

Then in the text, Record claims the Scottish Premiership side ‘want to trigger the clause of buying option’ for the player, which is set at €7m. It’s said the club want to do it ‘quickly’, as they ‘don’t consider the hypothesis of losing the opportunity’ of signing him permanently. 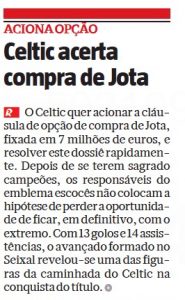 Either way, it sounds like Celtic are very convinced of buying Jota, and it will just be a matter of time until they finally trigger the buying option.

In his loan with the Hoops, the winger had 13 goals and 14 assists in 40 appearances. That was a big help for them to win the Scottish Premiership, so his stay in Glasgow should be no surprise.