Home Europe Celtic said to have been keen on midfielder, more than one €8m...
SHARE

Anderlecht settled for a 1-1 draw against Antwerp, and Adrien Trebel played the full 90 minutes for his side on September 2nd, but he could have been at Celtic or elsewhere.

Belgian newspaper Het Laatste Nieuws claims the midfielder has been struggling with an abdominal muscle problem for two weeks and started his side’s last fixture after taking an injection before kick-off.

He was not ready to get on to the pitch, but the medical help and his attitude saw him last the entire match. Hein Vanhaezebrouck was unimpressed after the 27-year-old failed to perform at the top level last weekend, but that doesn’t mean the Frenchman’s manager is unhappy with him.

Instead, he remains ‘indispensable’ for the Jupiler Pro League outfit and this is when the report mentions about interest from other European clubs in the former Standard Liège man.

Celtic, FC Porto and Hertha Berlin were keen on securing the 27-year-old’s signature and 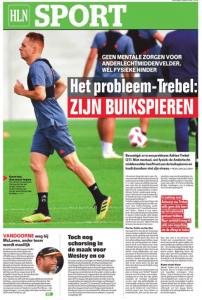 HLN even suggests that Anderlecht received more than one bid excess of €8m for Trebel.

Unfortunately for Brendan Rodgers’ side and the other two clubs, their approaches were turned down by the player’s employer. It’s made clear whether Celtic were one of the clubs to offer €8m+, but given there was more than one and three sides are named, there’s a good chance the Scottish Premiership club did.