Union Berlin’s Niko Gießelmann has emerged as a transfer target for Celtic, as reported in this week’s edition of SportBild.

The 30-year-old joined the Bundesliga side from Fortuna Düsseldorf in 2020. He struggled for regular minutes last season, when he was restricted to only 13 league appearances, which included only four starts.

His situation has drastically improved this term as the left-back has featured 14 times, 13 as a starter, scoring three goals and registering four assists in the process.

Gießelmann’s form has seen him ‘arouse interest’ from Ange Postecoglou’s Celtic and from clubs in England. 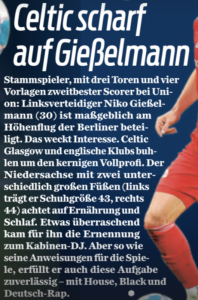 The report doesn’t provide details of the English sides that have shown interest in the player, but makes it clear that Celtic are ‘keen’ to sign him.

SportBild doesn’t mention whether the Hoops are looking at the German defender for the winter market or next summer.

Gießelmann’s contract expires in 2022 and if Union Berlin fail to tie him down to a new deal, they will see him leave the club as a free agent after this season.

That could be what Celtic are looking towards.