Celtic and Chelsea may have to fight off a raid from AC Milan should Ralf Rangnick end up in charge of the club next season.

The German has been heavily linked with a move to Milan next season, with the belief being they are eyeing him up as both manager and sports director.

There is no agreement in place as yet; indeed, at this moment in time, any potential move seems to be firmly in the balance.

Tuttosport cover the situation today and explain that, should Rangnick turn up in Milan, he has grand plans for the club and particularly the transfer market.

Milan don’t have the financial resources to add big-money signings to their squad and, as such, Rangnick would be likely to focus on young talent, which he’s done in the past.

That could lead him to target both Celtic and Chelsea, with Kristoffer Ajer and Ethan Ampadu on his list of potential signings should he move to the San Siro.

Both players would presumably be targeted to improve Milan’s issues in central defence, although they can also both play in midfield, another problem area for the Serie A side. 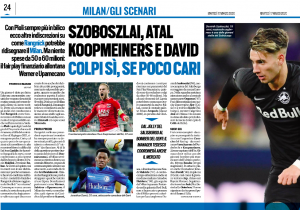 Celtic and Chelsea are unlikely to be willing sellers, though.

The Scottish Premiership champions certainly won’t want to lose Ajer and would demand a big price to sanction any deal.

Ampadu holds less importance at Chelsea but, given their turn towards youth under Frank Lampard, he is undoubtedly in line to feature more prominently down the line having been rated very highly by the club for several years.

Milan’s interest in both is down to the belief they can get them for relatively reasonable prices, but in reality, that’s hard to believe, and Rangnick may be wise to look elsewhere for the players he will need.