Spending a year of his career at Celtic between 2017-18 in their U17s, Aaron Hickey has since developed into one of Europe’s more exciting prospects at left-back, currently showing off his ability in Italy with Bologna.

The young defender has become an integral part of Sinisa Mihajlovic’s team, and has attracted a fair bit of interest in the process.

Clubs such as Aston Villa have already come knocking, but Celtic are also keen on repatriating Hickey, having tried to do so on more than one occasion.

That they were interested in him before his move to Bologna is well known, and their desire to sign him never waned, as Gazzetta dello Sport explain Ange Postecoglou’s team have ‘already enquired twice’ about the player.

However, the big problem for the Parkhead residents in all this is ‘there is no intention to leave’ the Italian club from Hickey at this moment in time, making any transfer away from Italy very difficult to pull off. 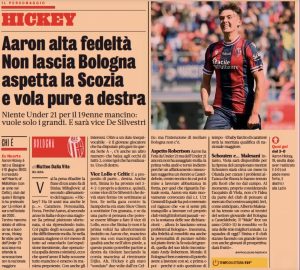 So, the Scottish left-back remains a pipe dream for Celtic, at least for the time being.

They all say patience is a virtue, and it could be that the Scottish Premier League club will need to learn all about it if they are to eventually bring back their former youth player.