Whenever something bad happens to Real Madrid, you can be sure the Catalan press will have something to say about it.

While they couldn’t say anything about the performance Zinedine Zidane’s team put in against Juventus on Tuesday night in the Champions League, they could, however, relay what the Telegraph recently reported about Mauricio Pochettino and his potential contract renewal at Tottenham.

The Argentinian was seen as a potential replacement for the Real Madrid manager should he get sacked for failing to win a trophy this season, and both Mundo Deportivo and Sport see this as a blow to their local team’s rivals. 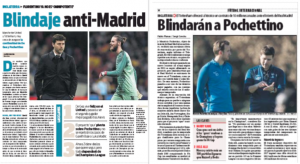 Sport label it as a dream ‘vanishing’ in front of Florentino Pérez’s eyes, and while Mundo Deportivo don’t quite go that far, you can tell the writer who typed the article did so with a big smile on his face.

We’ll have to wait and see if the €10m/year (£8.5m/year) reported figure for Pochettino is accurate, but you can bet there will be some mini fist pumps over in Barcelona if the former Argentina international puts pen to paper.