If there’s one player outside of midfield or the attack who has really taken to Pep Guardiola’s ideas and winning mentality at Manchester City, it’s Nicolas Otamendi.

The Argentinian has, under the Spaniard, become one of the stalwarts of this Premier League leading team, missing just one league game this season, and that was due to a yellow card suspension.

Plugging the hole left by Vincent Kompany and his injuries, the 30-year-old is one of the leaders in that team, and is now having to adjust to having either Aymeric Laporte or John Stones beside him in the centre of defence.

Arriving during Manuel Pellegrini’s last year in charge at the Etihad, Otamendi has seen all the changes Guardiola has implemented at Manchester City first hand since his arrival. 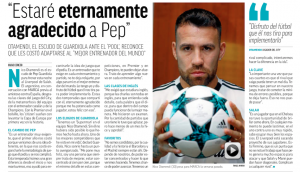 He told Marca: “He is a very demanding manager, which cost us the first year because he came with a different idea, and we had to get used to his game methodology, which complicated things. This season, we made a big difference from the start, and we stayed that way, which helped us understand what he was asking of us.

“He is a coach who demands everything from you in training and during a game. He doesn’t let you relax. That’s why he’s the best manager in the world. These two seasons I shared with him, I’m eternally grateful because he has empowered me as a player. I’m happy with that”.

The respect goes both ways, as Pep Guardiola recently referred to his centre-back as the team’s “Superman”.

For the centre-back, that means everything.

He continued: “It makes me very happy. I’m a person who always tries to improve, to be 100% focused, because even the smallest details in these competitions, in the Premier League or in the Champions League, can make you fail. I try and learn something new at every training session”.