Although we’ve been covering several stories saying West Brom and West Ham would be interested in Rodrigo Battaglia from Sporting, it seems there could be another two English clubs after the midfielder.

According to the outlet, the two clubs have made ‘informal approaches’ for the player, alongside Roma. The transfer amount being discussed for now would be €25m.

This figures are still not enough to convince Sporting, who are demanding at least €45m to start talking. With the player protected by a €60m release clause, the Lions can be very patient when negotiating. 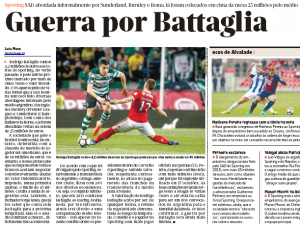 Although this sounds like a fancy signing for Burnley, but still possible, it’s a bit hard to believe that Sunderland would be joining this race, as the Black Cats have just been relegated to League One.

There’s zero chance of Sunderland either being able to pay the money, or the player being interested.

The only reason we can think Jornal de Noticias have mentioned Sunderland is that the club were linked when in the Premier League, and perhaps the newspaper thought they’d throw them in again… not realising what’s happened since.

Meanwhile, neither the Baggies or Hammers get a mention in the story.