It didn’t take much time for Wolverhampton Wanderers’ chase for Rui Patrício to become a big deal in the Portuguese press.

The Wolves’ interest gets a big story in today’s edition of A Bola, who puts the club as very serious competition for the goalkeeper.

They claim Patrício is already aware of Nuno Espírito Santo’s interest to take him to the English side, and there’s a real chance it may happen.

The Portuguese boss is reportedly looking for a more experienced goalkeeper, and the 30-year-old, who’s ‘used to playing to win’ and was a champion at Euro 2016 with Portugal, would be the right target. 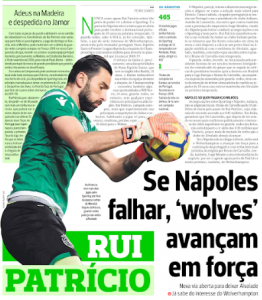 There’s obviously some competition for Patrício, as Napoli’s negotiations for him have been reported for a few weeks now.

But A Bola takes claims from Italy to show that the Serie A side don’t want to spend over €20m on the goalkeeper, quite below what Sporting are demanding, which is €35m.

That gives Wolverhampton an advantage, because according to the newspaper’s words, the Championship winners are not afraid of outbidding Napoli.

And even though Jorge Mendes is also intermediating the negotiations for Napoli, the fact he works with Wolves is taken by A Bola as an plus for the English side.