Ivan Perisic wanting to leave Inter Milan is no longer a rumour.

The club made it public over the weekend, and said they’ll try and work towards a transfer but the financial balance involved in such must be good for Inter.

That sounds very reasonable at this stage of the window.

Arsenal want a loan and don’t want a mandatory obligation clause. Gazzetta dello Sport explain the Gunners’ offer is €5m until the end of the season and then an option to make it permanent for €40m.

Inter ‘ask for an obligation’, or, and this is where it gets interesting, a ‘loan so burdensome it’s almost automatic’

What does that mean?

Well, there would be clauses in any loan deal which would see it turn permanent as long 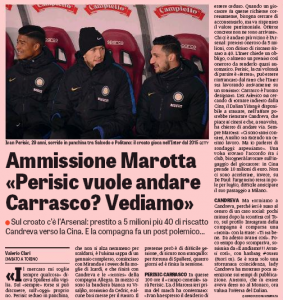 as certain targets are hit. If it’s successful it has to be something to please both parties.

From an Inter perspective that would likely be when Perisic has made an appearance, or at least a small number of them. For Arsenal it would likelier be related to things like Champions League qualification, as well as appearances.