Bristol City’s plans regarding the future of Pedro Pereira are reported by Portuguese newspaper Record today.

Following his signing on a one-year loan deal from Benfica at the start of the season, the Championship side would have the right to make the transfer permanent by triggering a buying option of €6m.

But according to Record, Bristol City don’t want to spend that much. They’re actually planning to negotiate a lower fee with the Eagles.

The newspaper claims that the English side would rather spend something around €4m for the defender. And this is something that Benfica president Luis Filipe Vieira could end up accepting. 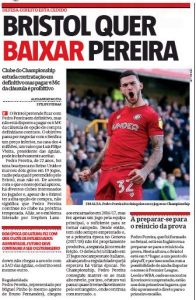 But Bristol City better be attentive, because there are reportedly other clubs who’ve been interested in the 22-year-old.

Record claims that in case the Robins don’t find a deal with Benfica, then the defender shall have another destination for the next season.

The outlet claims that his good appearances in the Championship are very likely to keep him ‘abroad’ for the coming seasons, as he has a good market outside of Portugal.