Speaking to the Scottish media this week, Slovan Bratislava director Ivan Kmotrik claimed Celtic had been in talks to sign Andraz Sporar.

In the interview, he also claimed Portuguese side Sporting are after the player, and today, the Lisbon press brings some updates on the situation.

Newspaper A Bola managed to confirm the Lions’ interest in the striker, but shows a big concern about the competition from the Hoops.

That’s because Sporting made a bid, but not bigger than €7m or €8m. That’s less than what Celtic ‘would have offered’. 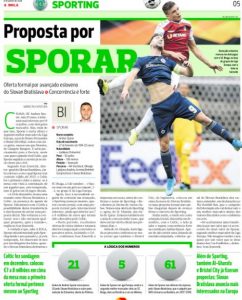 A Bola also managed to find out there’s another UK club who are after Sporar. They say Bristol City have made a formal offer for the player, even though they only did it ‘after Sporting’s firm attempt’.

They make it sound like the Championship side are not so strong in the race, and the Lions should be more worried about the competition from Celtic, even though they’re still to make an official bid for the striker.