It had been a while since we had last seen rumours about Moussa Marega’s move to the Premier League, but it looks like someone decided to reawaken them in the past few days.

It started with the English press saying this week that Aston Villa, Newcastle United and West Ham United are all interested in signing the Porto striker.

So it’s no surprise to open the Portuguese newspapers today and find something about it. It’s Correio da Manhã who brings a little update on the situation.

The outlet claims that following the news about interest from Premier League sides, Porto have set a price tag for Marega. Unsurprisingly, it’s the amount of his €30m release clause. 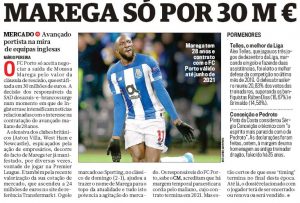 Since Marega’s contract with Porto expires in 2021, it’s claimed that before the next summer, the Dragons are either selling him or giving him a contract extension. These next six months are seen as a period where they can still demand a big amount for him.

Marega has seven goals and four assists in 21 appearances for Porto this season. But since he’s turning 29 in April, we’re not sure English clubs will be paying a lot for him.