It’s reported the 15-year-old has already trained with Borussia Mönchengladbach and now, the Seagulls have contacted the Swedish side to invite him for a trial. However, the two clubs are yet to agree on a date for the youngster to travel to England.

According to Transfermarkt, Hintsa plays in the midfield, preferably in the defensive midfield position. He’s a part of Halmstads BK’s youth team and is currently representing their U16 side.

Hintsa scored a brace in Halmstads U16s 7-1 victory over Ängelholms and also in their 3-3 draw against Varbergs BolS U16. He has five goals in three appearances in the U16 Ligacupen.

At the end of October, the teenager returned to his parent club after completing a week’s trial with Gladbach and speaking to Halmstadsport, Hintsa revealed the German club have asked him to visit again. 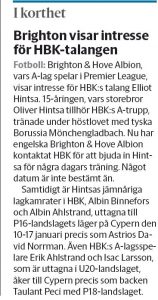 “The whole thing went really well and better than I could have imagined. They were really happy with me and want me to come and train with them again,” he explained.

When asked if he wants to go again, Hintsa said: “Yes! I would very much like to go there again.”