Just after the end of the transfer window, a couple of stories started to emerge that Valentin Antov was a wanted man in England.

The 20-year-old had just signed for Bologna in Serie A, but the defender’s path could have been very different had it not been for Brexit.

According to a couple of articles, both Arsenal and Manchester United wanted to the centre-back in the summer, but the people’s decision to leave the European Union made the move a lot harder to pull off.

Instead, he opted for a move to Italy in January, where Sinisa Mihajlovic welcomed him with open arms and is now ready to throw him in at the deep end.

We mention all this because the young defender is about to be trusted in the manager’s defence due to injuries, and local newspaper Il Resto del Carlino have a look at him.

Now joined by his girlfriend, Antov seems happy with his new surroundings, but the newspaper state ‘perhaps today they would make a steady couple in London if Brexit had not put a spoke in the wheel of the transfer to the Premier League’. 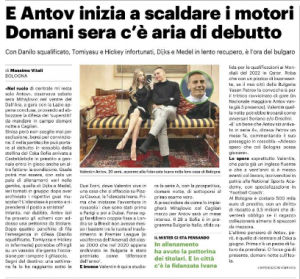 That’s when they explain that Arsenal were rumoured to have been the interested club who tried to bring him to these shores.

With Mikel Arteta still trying to get his Gunners firing and steady at the back, we’re not entirely sure whether Antov would have been much use next season, but it’s a well known fact the London club are always looking to the future.

Either way, the Bulgarian is now at Bologna, who have a €3.5m automatic purchase clause should he make eight appearances of more than 30 minutes each, meaning Arsenal will have to watch from afar for the time being.

“This is the main thing” – Liverpool star urges Reds to...

“I would understand that” – Player admits Chelsea might not let...