With 10 goals and six assists in 30 Championship games this season for Brentford, it’s no surprise that some Premier League clubs have taken an interest in Saïd Benrahma.

Clubs like Aston Villa and Leicester City have been touted as potential landing spots for the Algeria international, as have Arsenal.

Well, it’s the latter of those three who are now being mentioned by France Football this week in their magazine.

According to them, the 24-year-old’s performances for Brentford have ‘caught the eye’ of ‘many Arsenal former glories’, meaning ex-players.

Those unnamed retired footballers have since, allegedly, ‘whispered his name to the club’s board’, seemingly intent on getting him a move to the Emirates in the near future. 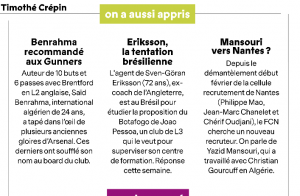 We’ll have to wait and see what happens with Benrahma in the coming months, and it may be he decides to choose another side as a stepping stone, one where he’d get more game time, before making the leap to a big club like Arsenal.

Either way, if true, this report suggests those in charge at the London club are now aware of who he is and will undoubtedly keep a closer eye on him going forward.