Southampton are one of the Premier League clubs who frequently pop up on scouting lists in Portugal.

The Portuguese media are handed out lists showing which officials watched particular matches and it often gives a good idea of transfer planning. Sporting, Benfica and Porto are easily the clubs most watched, however, scouts also pop up at other matches.

A Bola report Southampton had someone at Tondela’s 1-2 loss to Rio Ave on Saturday, and Gelson Dala was easily the most standout player. The 23 year old Angola international scored both goals for Tondela and picked up the best ratings from the Portuguese media.

That wasn’t the only match Southampton took an interest in, with the Saints also having someone at Braga’s 3-1 win over Setubal on Sunday.

Braga are currently third in the Portuguese league behind Benfica and Porto, and there’s been rumours of transfer interest from English clubs.

Interestingly, Southampton also watched Braga matches in November and December, so it’s quite possible they’ve got a target being lined up. 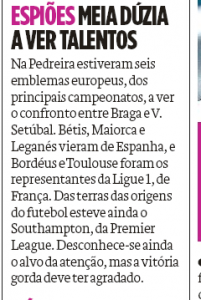 Francisco Trincão was Man of the Match, according to O Jogo, despite only playing 35 minutes. However, the 20 year old has already been secured by Barcelona for a summer transfer.

The Horta brothers (Andre and Ricardo) also played well, and it’d be no surprise to see one of them attract offers in the next window.

Southampton were the only Premier League club at both matches.