It seems that the summer transfer window could turn out to be a good opportunity for Newcastle United to try to sign Bas Dost from Sporting.

The Magpies reportedly bid €40m for the Dutchman last year, and as some reports keep insisting on the rumour, things look more likely this time.

Bas Dost wanted to leave the Lisbon side, according to A Bola’s report today. The squad’s fallout with president Bruno de Carvalho has convinced a few players to look for other clubs, and the striker is one of them.

The newspaper wrote that Dost has already told people close to him he wants a move, and authorised his agents to listen to offers. 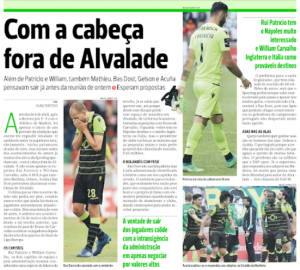 Dost is an important player for the squad, having scored 34 goals this season. That’s why Sporting shouldn’t make things easy for him to leave, and ask for something close to his €60m release clause.

But this story came in the morning, before Sporting players were attacked at the club’s training ground. Now according to CMTV, the striker was beaten and thrown to the floor, with his head and legs injured.

Gunther Neauhaus, Dost’s agent, has told O Jogo: “This is not acceptable, it’s a dangerous situation. Bas is one of the most important players in Sporting in the last 10 years.”

He’s said to be ruled out of Sunday’s cup final, and could be one of many players who are expected to break their contracts with the club this summer.

So Newcastle may have an opportunity on their hands.