Just over a week ago, we covered a story in Spain claiming that Celtic were interested in an Atlético Madrid youngster.

His name is Rodrigo Riquelme, and it was reported by Marca that Neil Lennon’s side were one of the clubs to have ‘knocked on his door’ to try and work out if they had any chance of signing him.

The 19-year-old forward is said to be looking for first-team football, which Celtic should be able to offer him, as his path is currently blocked in Spain’s capital by some quality players in Diego Simeone’s squad.

His contract is set to expire at the end of June, making him a free agent on the transfer market, which is why Corriere dello Sport take a quick look at him on Friday as they highlight all the possible good deals clubs could do in the coming months. 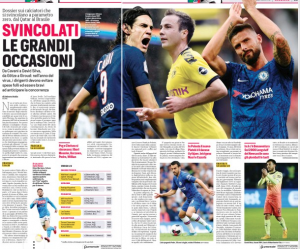 When it comes to Riquelme, whom they say has been compared to Antoine Griezmann, they claim he has a ‘big economic offer from Celtic’ in front of him.

No more details are given, but if that’s true, then it seems the Scottish side are really intent on bringing him to Parkhead, and have done a bit more than simply ‘knock on his door’.

Everton man has ‘convinced’ himself to join club – He ‘can’t wait’ for exit, belief loan deal is most viable option

Everton man has ‘convinced’ himself to join club – He ‘can’t...

Manchester United ‘ready’ to spend €90m on player – Have already...