Manchester United midfielder Marouane Fellaini has been making headlines in the last few days as his contract at Old Trafford will expire on June 30th.

We carried a report from Belgian newspaper Het Laatste Nieuws on June 26th, who claimed the Red Devils have made more than one offer for the former Everton man to extend his stay at United.

They also mentioned interest from Arsenal as the player prefers to continue in the Premier League.

Fellaini is with Belgium at the 2018 World Cup and they face England in the last group stage fixture. The 30-year-old was asked about his future during the pre-match press conference on Tuesday.

The midfielder admitted that he knows where he will play next season and a decision on his future will be announced during the ongoing Fifa tournament in Russia.

Today’s edition of HLN claims, without a “sudden turnaround”, that Fellaini will now commit his future to the 20-time English champions. 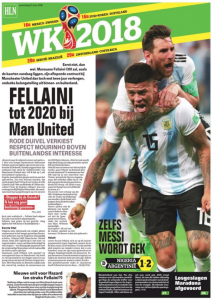 Fellaini has set his sights on winning the Premier League. He believes having Mourinho in charge and his compatriot, Romelu Lukaku, leading the club’s attack can help United to win the title.

Therefore, Fellaini has decided to commit his future to his current employers until 2020. If this is true, it is unlikely to be received well by a section of United fans.