Home Europe From Belgium: Atletico have €20m Dendoncker agreement, but not all is lost...
SHARE

Belgian newspaper Het Nieuwsblad have a big article in their Tuesday edition claiming Anderlecht signed a preliminary agreement ‘a few months’ ago with Atletico Madrid, committing to sell them Leander Dendoncker for €20m in the next summer transfer window.

It’s stated Atletico have the option to sign the player for such a fee, but aren’t committed to using it. Should another club offer more than the €20m agree fee, then Atletico have a right to match it.

Dendoncker can’t be forced into accepting the move.

This all comes as something of a surprise, given the attempts from West Ham and others to sign the player in the winter window, which would surely suggest any agreement must have come after that… a further surprise as Anderlecht have only recently changed owners and this must have been agreed by the previous regime.

Het Nieuwsblad say Dendoncker tried to get a transfer to West Ham, Everton or Crystal Palace during the winter window, but Anderlecht blocked it. 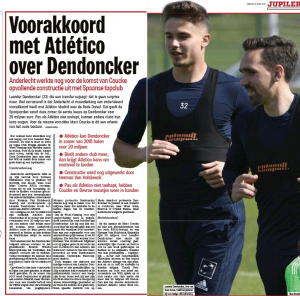 After that there were widespread claims in the Belgian media that Dendoncker had been given an assurance he can leave in the summer for around €15m, obviously less than the €20m said to be agreed with Atletico.

This hasn’t been covered in Spain, and even if true it’s certainly not all hope lost for West Ham. Atletico may decide not to take up their option, and Dendoncker himself may well prefer a move to the Premier League.