A few days ago, De Telegraaf went big on Daley Blind potentially returning to Ajax. The Manchester United player is said to be up for the move and has indicated that to the Eredivisie side.

The Dutch newspaper explained the potential hurdle in the way of a deal would be dealing with Manchester United, who would perhaps want a higher fee than Ajax feel they can pay.

It’s gone a little quiet since, but Friday’s edition of De Telegraaf has an interview with Tottenham defender Toby Alderweireld. It’s mostly quite bland, but when they ask him about Blind’s desire to return, the Spurs star opened up a little more and explained he knows the player well, and not just from football.

“Daley is a top guy! I haven’t only played with him, but was also with him at school. He is a real Amsterdammer. That he has indicated that he wants to come back is – if it succeeds – beautiful for both parties.”

So how about joining him then Toby?

“Looking into the future is difficult. But in the long term I am certainly not negative about a transfer to Ajax. I had a great time there.” 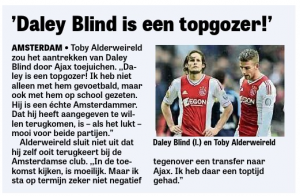 Alderweireld is 29 years of age, he’s likely to either move or sign a new contract this year.

That would surely be for a minimum of three years, taking him to 32 and perhaps a season or so with Blind in Amsterdam.