For the last few days, Leeds United, Brentford and RB Leipzig have been credited with interest in Rasmus Kristensen.

It was also explained the Red Bull Salzburg player has a €13m release clause in his contract.

On June 2nd, Ekstra Bladet reported Leeds United have opened negotiations with the Austrian champions and have also tabled a £10m [€11.7m] bid for the right-back.

It was also explained there has been no agreement between the two clubs, while the 24-year-old is still to make a decision to join the Whites.

There have been more claims in the English press stating that the two clubs have reached an agreement for the Denmark international to make a switch to Elland Road.

Austrian newspaper Salzburger Nachrichten relays it and then gives their own information on this case. They found out on Thursday that Leeds United and Red Bull Salzburg have ‘agreed on a transfer’.

Salzburger Nachrichten don’t provide details of the agreement. However, they do point out the defender’s €13m release clause and state it is a ‘bargain for Leeds United’.

It’s claimed Jesse Marsch is a ‘big fan’ of the ‘mentality monster’ Kristensen. It was the 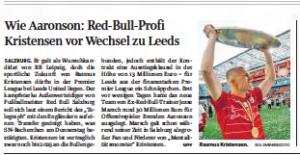 current Whites manager who signed the Dane for the Austrian champions in 2019.