Home Europe Barcelona’s goal is to ‘convince’ player for transfer, his future is ‘alongside...
SHARE

On November 21st, Mundo Deportivo reported that Paris Saint-Germain’s Adrien Rabiot wants to join Barcelona next summer and has already said ‘yes’ to them.

The 23-year-old’s contract at Parc des Princes runs out after this season and the Ligue 1 winners have struggled to tie him down to a new deal.

Two days ago, we carried a report from Le Parisien, who claimed that PSG are looking to cash in from the midfielder’s sale in January and are ready to sell him for €10m, providing an opportunity to potential suitors to snatch him from the Catalan club.

The PSG contract rebel will be allowed to sign a pre-contract agreement with clubs outside France and should he do that, he will earn a signing on fee from his future club.

Sport now claims Ernesto Valverde’s side are planning to take ‘necessary actions’ in the next few weeks so that they can secure the services of the long term target. 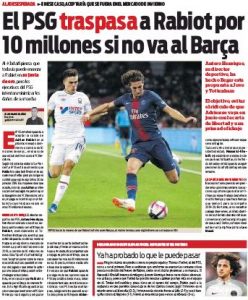 It is not the Blaugrana’s intention is to sign Rabiot in the mid-season transfer window and with his employer’s latest tactics, Barca’s goal is to ‘convince’ the player to join them on a free transfer next summer and also that his future is ‘alongside Lionel Messi’.

It will be interesting to see whether PSG will be successful in selling him to another club in January or whether Rabiot move to Camp Nou on a free transfer after this season.

Relations between Barca and PSG could become further strained.