Whilst Monday’s edition of Sport concentrates on Barcelona’s efforts to sign Clement Lenglet from Sevilla, another Catalan newspaper, Mundo Deportivo, takes a wider look at the club’s efforts ahead of the summer transfer window.

After Champions League disappointment, the blaugrana have identified four players who they hope could make things better in the future.

Barcelona have a ‘renewal plan in progress’ for the next transfer market. Pursuits of Arthur, who has already been pictured in the club’s shirt, and Antoine Griezmann are well covered and get a mention again.

Concerned that Ousmane Dembele and Luis Suarez may not bring enough goals next season, Griezmann would be the man to fix that particular Barcelona issue, believe the Catalan newspaper.

Gremio’s Arthur is compared to Xavi Hernandez and the idea is to have him arrive from January, given the different calendar the Brazilian game works to.

De Ligt is a central defender who has repeatedly been linked to Barcelona in recent months. Barcelona are said to see him as someone who could be the long term replacement for Gerard Pique. 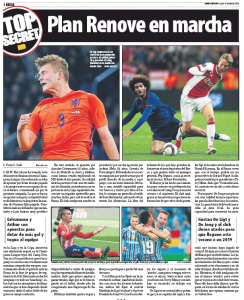 De Jong is a pivot midfielder and the La Liga club are impressed with his technical quality, distribution and ability to drive forward.

Like with Arthur, there’s no huge rush to sign the Dutch youngsters and they could arrive in the summer 2019 window, with efforts already starting now.

Mundo Deportivo report this long term plan ‘requires money’ and it’s reiterated that Barcelona simply must sell some of their fringe players.