There’s no real argument against Jordi Alba being a good Barcelona signing.

Arriving in 2012 from Valencia he’s been a reliable top class fullback and there’s still some life in the 30 year old yet.

Of course, there’s been ups and downs and his protracted efforts at forcing his 2019 renewal and seemingly trying to get a bigger package than was ever coming his way, aren’t so old in the memory, but Alba is very much Blaugrana.

Aligning himself with Lionel Messi as much as possible was a power play leading up to that renewal situation, and Barcelona didn’t panic about potentially losing Alba as much as he may have hoped.

The renewal eventually came, and everything continued as normal. Alba remains in the team, and despite efforts to find competition for him he’s always come out on top.

A typical acceptable but not thrilling performance came from the Spaniard on Saturday as Barcelona beat Real Sociedad 1-0. Another ball hit the back of La Real’s net at the Camp Nou, from Alba himself in injury time.

During his celebration, the fullback put his fingers in his ears. This was seen as him responding angrily to negative feedback in the stadium, from supporters who weren’t impressed with the general performance and who have been irritated by fresh suggestions some in the squad can’t take criticism, this time with them reportedly being upset by assistant manager Eder Sarabia.

Alba’s goal was then disallowed, so it wasn’t the best look for him. 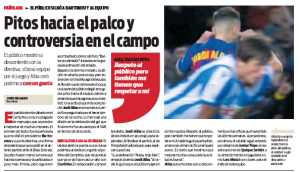 After the match he was quizzed in the mixed zone, and Sport quote him as saying: “Nobody likes that the public goes against us. I respect the public, but they also have to respect me.”

That will not go down well with a section of fans.