After Antoine Griezmann told Telefoot he has to make ‘sacrifices’ to sign for a new club, there’s been a growing feeling at Barcelona the forward has decided to join them.

Atletico Madrid have already confirmed their star will leave the club in the summer transfer window and on Wednesday, Los Rojiblancos CEO Miguel Ángel Gil Marín revealed the France international decided in March to make a switch to the Camp Nou.

However, the transfer has not been made official yet because the 28-year-old’s current release clause is set at €200m and his asking price will drop down to €120m from July 1st.

Therefore, it is only after this month the two clubs are expected to complete a deal for the former Real Sociedad star.

Journalist Miguel Rico, writing on the last page of Mundo Deportivo explains the World Cup winner is expected to join the Spanish champions on a specific date.

If ‘everything goes well’, Griezmann will join Barcelona on July 14th. 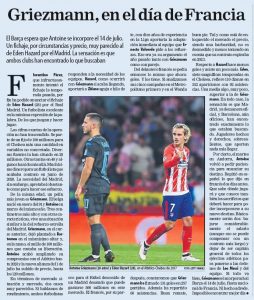 Why on that day? Because it is the National Day of France.

Rico claims this was not done on purpose, but stressed it was ‘impossible to find a better day’.