Adrien Rabiot’s current deal at Paris Saint-Germain runs down in 2019.

Barcelona have maintained their interest in the midfielder and Mundo Deportivo reports they have not ruled out the possibility of bringing him to Camp Nou, despite adding Arthur and Arturo Vidal to the squad.

Ernesto Valverde’s side are aware that a move for the 23-year-old will be ‘complicated’, but not impossible.

This is because the Ligue 1 winners are interested in signing Atletico Madrid’s Filipe Luis and for Thoms Tuchel’s side to sign the Brazilian, the report claims that have to raise funds by allowing their player to leave.

PSG have managed to gather €65m from the sale of players, while they spent €172m on incomings, which includes €135m paid to AS Monaco for signing Kylian Mbappe on a permanent deal. It does not include €40m in bonuses for the France international. 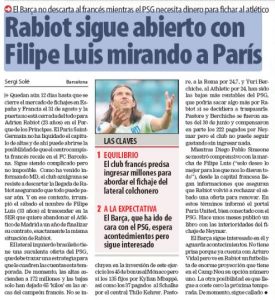 PSG can earn more if they allow Rabiot to leave, but the Spanish club are not in a hurry to sign him as they can land him on a free transfer next summer, if he decides against signing an extension at the Parc des Princes.