Marcus McGuane moving to Barcelona was one of the more eyebrow raising transfers at the end of January, but certainly an interesting opportunity for the footballer.

At Arsenal since the age of six, McGuane’s contract was set to run out this summer, and with renewal efforts not getting anywhere, he moved to Barcelona for an undisclosed fee.

McGuane has been registered for Barcelona’s B team, which plays in the second tier of Spanish football, and he’ll be alongside a mix of players of different ages, it’s not just used as a youth team.

With no Barcelona fans having a clue who McGuane is, other than a he-must-be-alright-he-played-for-Arsenal stance, Sport have enthusiastically declared he’s already impressing.

In their Friday edition, the Catalan newspaper explain McGuane’s Barca B teammates have been impressed by the former Arsenal player’s ‘high level’ in initial training.

Sport explain: ‘Marcus McGuane has had just a training session with Barça but has already generated many expectations. At Arsenal he had already played a game in the first team of Wenger with good performance. Of him they emphasise his enormous physical power and that technically he’s excellent.

‘Another key to his signing is his versatility. McGuane can play defensive midfielder, midfielder, centre back or side. Undoubtedly, a multipurpose for Gerard Lopez. Therefore, 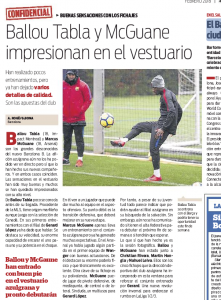 despite his youth, everything seems to indicate he will be able to help the Barca branch in their search for salvation.’

It’s a huge change of circumstance for McGuane. A move from Arsenal, where he’s been since a young child, a new country, a new football, and thrown straight into a real football situation.

Not to mention the media attention he’s now going to get. We’ll be keeping an eye on his progress and hope we can bring more articles from the Catalan media praising the youngster.