During the past couple of months, it really seemed like Rafa Silva would leave Benfica.

With only 512 minutes played this season, it was pretty clear the midfielder needed game time somewhere else, and that’s what made the Wolves rumours plausible.

Wolves’ interest was reported in December, and when the Portuguese press claimed there were ‘concrete offers’ coming from England last month, we though that could be coming from the Championship side.

But the window closed, Rafa is still in Lisbon, with no big rumours of a departure in the last days of the market. However, perhaps now we know why Wolves walked away.

As reported by O Jogo today, Benfica had a pretty good offer from Napoli to let the player go, but didn’t accept it. The bid was a €2m fee for a loan deal plus a €20m buying option at the end of the season. 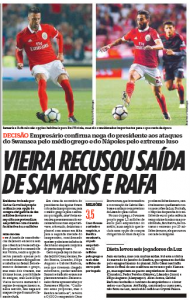 If Benfica didn’t accept that, that’s obviously because they wanted more money, meaning the signing may not have been so attractive for Wolves.

Besides the fact that Silva would be the club’s most expensive signing ever, it’s worth recalling that Wolves have confirmed they will be signing Diogo Jota permanently, so that would implicate quite a lot of money being compromised even before the confirmation of promotion to the Premier League.

Maybe with a new budget in the summer, this signing could still be a possibility.