Of all the young players making a stir this summer, none have done so quite as much as Matthijs de Ligt.

The Ajax centre back is one of the darlings of Europe, chased by every big club and with offers coming out of his ears.

The last few months have been rife with speculation about where he’ll go next. Barcelona were at the front of the queue for a long time but it seems Juventus have won the race.

A chat with Cristiano Ronaldo during the Nations League seems to have turned the players head, never mind the huge money the Serie A giants are offering.

Barring a sudden change of heart De Ligt will be playing in Turin next year. However, it seems Barcelona made one last attempt to ensure that wasn’t the case.

According to Mundo Deportivo, Barca president Josep Maria Bartomeu tried to convince De Ligt to head to Cataluña this summer.

The newspaper reports the president was planning an ‘express trip’ to Amsterdam to meet De Ligt face to face and convince him to turn down Juventus in favour of Barcelona.

It was something he did with Frenkie de Jong when it looked like he would be joining Paris Saint Germain. His plan on this occasion was to explain that ‘the club goes far beyond just a football team, something that no other club in the world can boast.’

De Ligt was open to the meeting too but made his agent Mino Raiola aware of the situation and the Italian insisted everything go through him.

Bartomeu saw this as a problem and, before travelling out, spoke to Raiola on the phone. During that meeting, Raiola made it clear that they would only meet with Barcelona if they promised to match what Juventus are offering.

Two of those conditions were an €11m commission for Raiola and €10m a year in wages for De Ligt, something Bartomeu rejected outright. 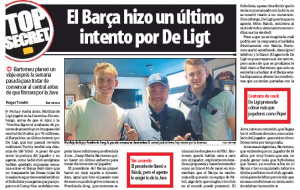 He was willing to accept that the young Dutchman is a prodigious talent but refused to offer him a wage packet that would see him earn more than senior players at the Nou Camp, particularly ones who have ‘won all possible titles with the club’.

Bartomeu thanked Raiola for the phone call and cancelled the meeting, stating that it didn’t make sense to hold one if those were the conditions and thus ended Barcelona’s interest in the defender.