The official is responsible for the club’s reserve and youth squads, and had a lot to say about youngsters who left or are still at Barça’s academy.

One of them is Takefusa Kubo, who once belonged to the club and has recently been signed by La Liga rivals from Real Madrid.

Kubo joined Barcelona in 2011 and left in 2015, making a move to his home country Japan, joining FC Tokyo. That’s where he became a professional and his success attracted the interest from the Galaticos, who signed him this summer.

First speaking of the midfielder’s departure from Barça, Silvio Eliás said his entourage had been demanding too much at the time.

“You have to see everything they asked for, their demands, sports and economic. The coaches decided that it couldn’t be afforded. It was the decision of the coaches, although we asked them to look hard at it.” 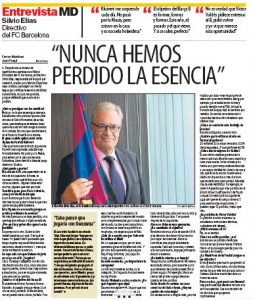 Then when speaking of the move to Real Madrid at a time when Barcelona were interested in bringing Kubo back, Eliás says he always thought Zinedine Zidane’s side would end up loaning him out.

“I think he imagined that he would play next to Benzema. But it’s the same case as others, such as Mboula, who we don’t even know where he is. The president and I tried to convince him that, as soon as he signed, they would stop making promises. But he had already swallowed it.”