Since the end of the transfer window, a couple of stories have emerged about a Sheffield United interest in RKC Genk’s Sander Berge.

The Norwegian defensive midfielder is widely seen as one of the better up and coming talents in his position, and clubs such as Liverpool and Sevilla have been keen in the past.

However, Sheffield United were the only club to come forward with a serious ‘concrete’ offer, as was reported by HLN towards the end of August, and the player, who will be playing in the Champions League this season, suggested he wanted to ‘aim even higher’.

Fast forward to this week, and Genk’s director of football, Dimitri de Condé, has spoken to Sport/Foot Magazine about the decision to keep Sander Berge, and openly discussed the bid he received from the Blades.

He said: “I spoke to [Berge] at the beginning of the transfer window. He felt better here than a year ago and went straight to the point: if there was no interesting offers for the club and himself, he would stay. 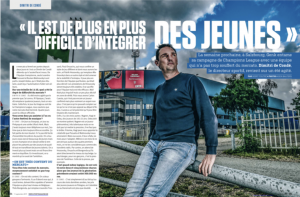 “We received a nice offer from Sheffield United, close to what we wanted for him. Not far off €20m, but it wasn’t the club he wanted. Playing the Champions League, that’s something. Without that, we would have probably lost more players, but when you have the choice between an average team in a big league and a season in the Champions League with Genk, you think about it”.

It might seem a bit harsh, but for a young player, featuring and starting in the elite European competition is certainly a step up from (probably) battling against relegation in the Premier League, especially when you have the rest of your career to think about.

A good few displays for Genk in the group stages could see bigger clubs come knocking, and for someone like Berge, that’s probably a bit more appealing than a move to Bramall Lane.

Arsenal ‘seem determined’ to sign player this summer – Could result...

Newcastle United ‘launch’ for signing – Magpies prospective owners have a...